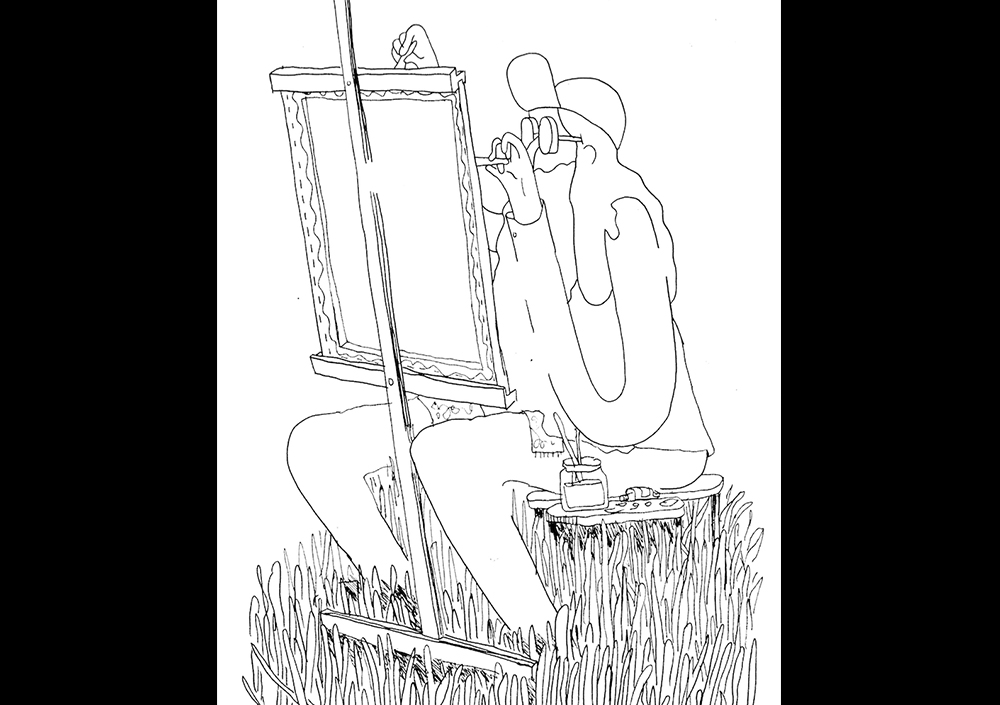 Mike Perry makes paintings, animation, sculptures, books, public art installations,
monographs, exhibitions, drawings, silkscreens, and more. His creative purpose is
to conjure that feeling of soul-soaring wonder you have when you stare into distant
galaxies on a dark night, when you go on long journeys into the imagination, when
you ponder what it is that this life is all about. In so doing, he celebrates form: of
the human body, of shapes and lines that coalesce into lyrical masses, of the
vastness of the cosmos and the questions it calls us to. In Mike’s patterns, portraits,
and dreamscapes, there are layers upon layers of meaning, some erased, some
covering, some asking you to look deeper, some no longer there but still vibrating
with a story that sought not to be forgotten. His use of color, pattern, and form, at
times child-like, expresses a joyful spirit and a reverence for the bliss that is
inherent in the human experience. He is continually exercising his faith in the
transformative power of making things. His work can be considered love notes to
the abstract, unknowable future that is all possibility in the present. He invites you
to join him on this curious journey to discover more of the unknown.
MIke’s work has been exhibited across the globe in countries such as Germany,
Australia, China, Singapore, and Holland with solo shows featured in London –
“The Landscape Between Time & Space” 2008, Tokyo – “We are the Infinity of
Each Other” 2011, NY – “Wandering Around Wondering” 2012, and most recently
“Intoxicating Pollen Wiggling in a Moist Journey of Constantly Blooming Tides”
at Garis & Hahn’s new Los Angeles location in the fall of 2017. He is the curator
of the ongoing series “#GetNudeGetDrawn” which is gearing up for its sixth
installment in 2018. His foray into the world of animation has been highlighted by
his continued work on Comedy Central’s Broad City along with an audio/visual
collaborative installation at the Dolby Headquarters in San Francisco as part of
their ongoing Artist Series. To round out his creative canon one can throw in a
dozen art & design books in print along with a stint of doing illustrations for
Playboy magazine. When Mike is not sharing his knowledge at the likes of Parsons
at the New School, Adobe’s 99U conference, or an 8th grade art class at the World
School, he is drinking coffee and painting in his Brooklyn based studio under the
watchful gaze of Bass the dog.