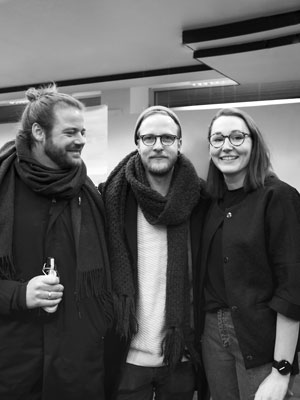 Daniel Buchholz (M.A.) and Jan Wagner-van der Straten (M.A.) completed their study program in communication design (Bachelor) and information & communication (Master) at Münster School of Design (MSD). During their studies they put main emphasis on corporate communication, corporate publishing and corporate social responsibility. Meanwhile they worked for agencies in Berlin, Köln and Münster. Their work has been awarded 2013 by the Art Directors Club (ADC). Furtheron NEU has been nominated in 2015 for the German Design Award as „Newcomer Nominee“.

Daniel and Jan began 2013 as a duo and founded NEU. Since then NEU expanded to a network existing of designers, photographers, copywriters, programmers and illustrators. In 2016 Carina Mähler (B.A.) joined NEU. In february 2018 she took over the leadership of creation. Daniel Buchholz and Jan Wagner-van der Straten still are part of the managment at NEU. Along to their positions as art directors at the cologne based agency Meiré und Meiré they operate as advisors for NEU.